As we approach the day in which we are purified by the holiness of Yom Kippur, we recall the sacrifices and heroism of Boro Park’s early residents in establishing Mikva’os.

Boro Park’s first and second main mikva’os are a proper reflection of Boro Park’s two main eras; the prewar era—between the 1900’s and the ‘40’s, which necessitated its own brand of spiritual courage—and then the mass influx of Holocaust surviving Jews, who shaped the Boro Park that we know today.

In 1937, we read in Hamesilah, published by Agudas Harabanim: “Boro Park must be congratulated. The joyous air that permeated the thousand-strong crowd which was gathered On Sunday, 14 Iyar (April 25, 1937) at the Shomrei Emunah Shul regarding the founding of a modern beis hatevillah in this area, has once again demonstrated that Yiddishkeit flourishes, and has found its proper place in this land.

“The warmth with which the speakers were welcomed, and the inspiration that was felt when thousands of young and old, men and women, marched to the ground where the mikveh would be erected (a couple of blocks up 52nd Street, where it stands today), indicated that our nation can easily be enflamed should the properly warm and dedicated doers be found. 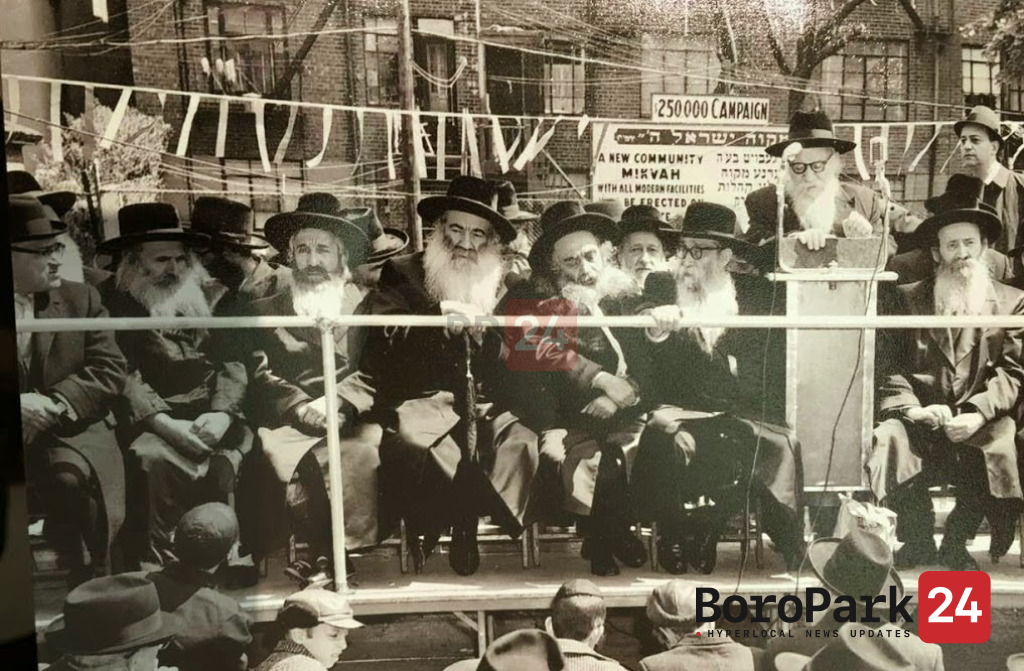 “We congratulate the Boro Park Jewish community and its leaders, specifically the Young Israel and its leaders.” Indeed, the legendary Irving Bunim, along with his wife Blanche, were one of the primary drivers of this project, with Mrs. Bunim raising a great amount of money toward this project.

In connection with mikvah in the early 20th century, it must be noted that one highly important Boro Park resident of that era was the renowned Dr. Jacob Smithline who was an international activist for taharas hamishpacha, and corresponded at length with the Chofetz Chaim who encouraged him greatly in his effort (perhaps we will tell his story some other day).

Boro Park’s first mikveh continued to be owned by the Young Israel of Borough Park, and when their main building was sold to the Klausenberger Kehillah for their girl’s school, the mikvah was part of that sale.

In 1964, the Kopysnitzer Rebbe moved to Boro Park from the Lower East Side, and established his shul on 55th Street, where it exists today under the leadership of his grandson, the current Kopyshnitzer Rebbe, shlit”a. From the moment he arrived, this issue—the growth in Boro Park’s population, with not enough mikva’os to serve them—consumed him.

He involved a number of other prominent Rabbonim in this project. Then the Rebbe set about gathering the funds: There was one yid in Flatbush who was willing to give $5,000, but the Rebbe would accept no less than $10,000.

The groundbreaking drew the royalty of Boro Park with all of its prominent Rabbanim. Once again, Irving Bunim who was indefatigable in this effort as well—a bridge from Boro Park’s past to its present—headlined the event. And the rest is history.

A Foundation of Tears

Relates Reb Yitzchok Trieger, a world-renowned expert on mikva’os: “The Debreciner Rav who was one of the primary Rabbanim involved with the mikvah. He was present when we poured the foundations, and as the concrete was being poured in, two hot tears rolled down from his eyes, blending with the wet cement. He explained; ‘In the aftermath of the war, I returned to Debrecin, and with these ten fingers I dug the first mikveh. Never did I believe that I would arrive at such a day.’”

This story encapsulates perfectly the bridge that Boro Park was from the old world to that which we see today—a town whose Jewish history is divided in two eras, the lone soldiers in the American wilderness who paved the way for the haven that it would be for the broken Holocaust survivors who sought to rebuild their lives in Boro Park of yesteryear.