KIDDUSH HASHEM: Chassidic Community At The Forefront Of The Haitian Relief Effort

As the people of Haiti begin the difficult process of recovering from a devastating earthquake that claimed over 2,000 lives, the Chassidic community in New York rallied together to support relief efforts for the victims.

Assemblyman Simcha Eichenstein is at the forefront of the drive to provide essential supplies and resources to those who are affected. Last Thursday, Assemblyman Eichenstein and Rockland County Legislator Aron Wieder joined community leaders and elected officials in Rockland County to spearhead the relief campaign. Pallets of food and supplies were collected and loaded onto trucks to be shipped to Haiti.

“No matter your background, race, or religion,” said Assemblyman Eichenstein. “Step up. Contribute. Join this effort. We are at our best when we are united.”

“The Haitian community and the Jewish community live together in Spring Valley,” said Legislator Wieder, an organizer of the relief effort. “We pray together and we mourn together. We rejoice together and we help each other out. Today we are all Haitians.”

In Boro Park, Assemblyman Eichenstein along with State Senator Simcha Felder and Councilman Mathieu Eugene joined community leaders and members of the Boro Park Jewish Community Council and Agudath Israel of America in urging their neighbors to assist in the Haiti Earthquake Relief Drive. The effort in Boro Park was launched in front of the BPJCC on Thirteenth Avenue and 46th Street.

Those spearheading the effort pointed out the significance of performing acts of charity and kindness during this awe-inspiring time of year.

"It's terrible to imagine what the people of Haiti must be going through," says Avi Greenstein, BPJCC CEO. "Just thinking about that amount of suffering is enough to create a response like this where the people of Boro Park come together to do our best to help. It's what we do -no matter when and no matter where."

Donations in Boro Park included pallets of toys, generously sponsored by Yossi Itzkowitz, BPJCC’s Executive Board Member and owner of the Toys 4U store chain.

“It is a great honor,” said Assembly member Bichotte, “to have people like COJO and Flatbush Jewish Community Council and Agudath Israel and Met Council and UJA and JCRC and JCC and so many organizations who have come out and poured their hearts, their dollars, and their supplies, to help the people of Haiti who are suffering.”

Borough President Eric Adams expressed his appreciation to the community on Twitter. “Thank you, @SEichenstein and to all of the Hasidic community members and organizations that have been collecting relief supplies for Haiti,” Adams tweeted. “This is the very best of what New York can be; people from all different backgrounds coming together to support those in need.”

Over a million dollars has been pledged or contributed by the Jewish community in Rockland County with many more donations coming in from the communities of Brooklyn and beyond.

Residents of Boro Park can participate by bringing critically needed supplies during regular office hours, at the BPJCC, 1310 46th Street.

Donations can also be sent to the drive through Amazon. The supplies purchased via the following link will be sent to the BPJCC to be shipped directly to Haitian families in critical need. 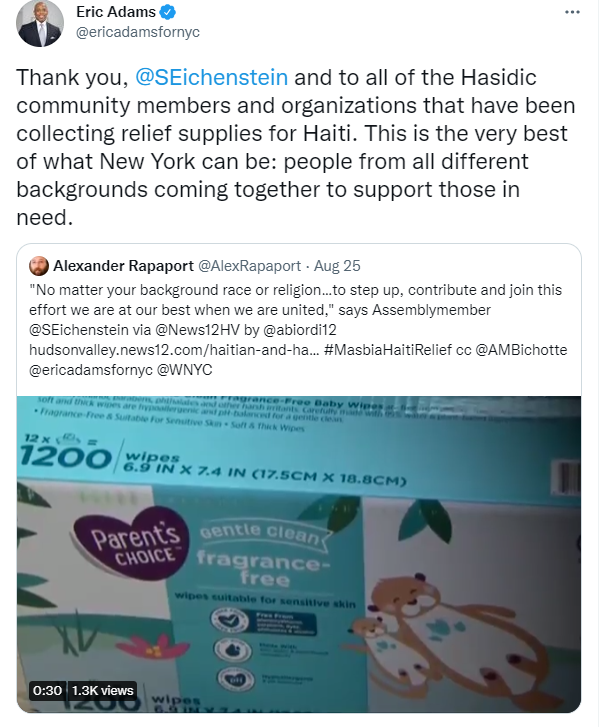 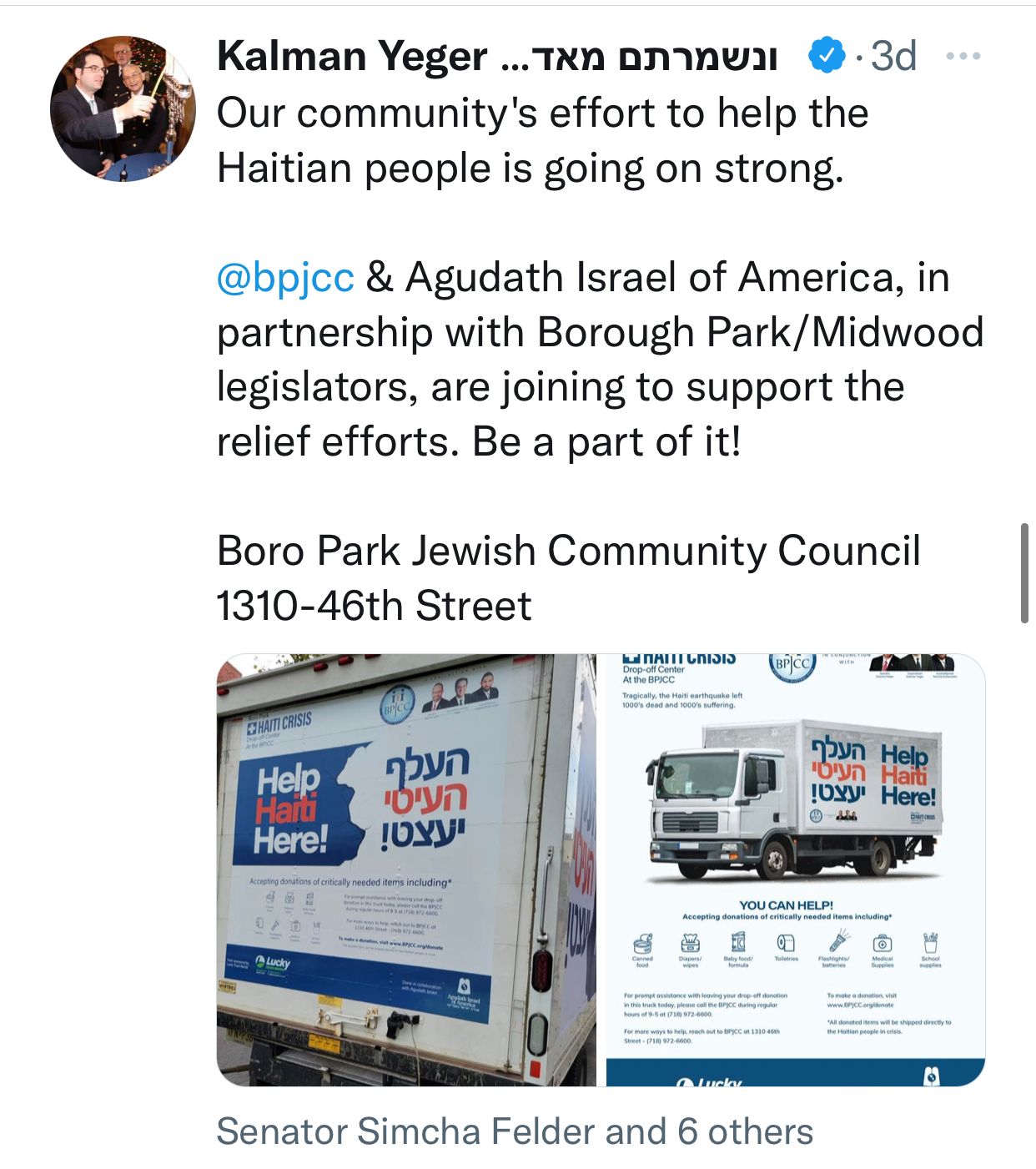 Visnitz Rebbe Shabbos in the Raleigh Hotel in South Fallsburg